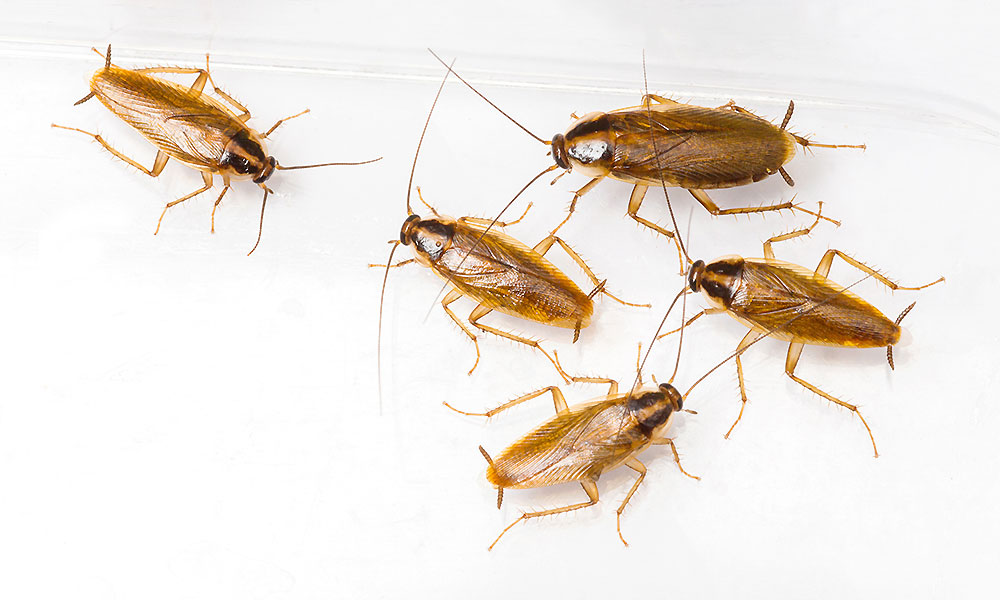 The German cockroach (Blattella germanica) is a widely distributed urban pest. It is also the most common cockroach species in houses, apartments, restaurants, hotels, and other institutions.

Adult German cockroaches are 1/2 to 5/8 inch long and tan to light brown. Although they have fully developed wings, they do not fly. Nymphs are similar in appearance to adults except that they are smaller and lack wings. The German cockroach is best identified by its small size and by two dark parallel lines running from the back of the head to the wings. It is usually found in kitchens (near dishwashers, stoves, and sinks) and in bathrooms of homes.

German cockroaches usually prefer a moist environment with a relatively high degree of warmth. The insects are mostly scavengers and will feed on a wide variety of foods. They are especially fond of starches, sweets, grease, and meat products. In many locations, garbage is a principal food source. As with other species, German cockroaches are mostly active at night, when they forage for food, water, and mates. During the day they hide in cracks and crevices and other dark sites that provide a warm and humid environment. Their relatively wide, flat bodies enable them to move in and out of cracks and narrow openings with ease. They may be seen during the daytime, particularly if a heavy population is present or if there is some other stress, such as a lack of food or water or an application of pesticides.

The German cockroach has three developmental stages: egg, nymph, and adult. Females produce a light brown, purse-shaped egg capsule that is less than 1/4 inch long and contains two rows of eggs. Each capsule contains up to 48 eggs (usually 30 to 48), and adult females usually produce from four to eight egg capsules during their lifetime. At room temperature, one capsule is produced about every 6 weeks. Egg capsules are carried, protruding from the abdomen, until hatching time when they are deposited into crevices and other sheltered locations. It usually takes 28 days for the capsule to hatch from the time it begins to form. Formation of the next egg capsule usually begins within a couple of weeks. The length of the egg stage varies from 14 to 35 days, with six to seven nymphal stages (instars) occurring over a period of 6 to 31 weeks. The life span of the adult female varies from 20 to 30 weeks. In one year over 10,000 descendants can be produced, assuming two generations per year.

German cockroaches produce odorous secretions that can affect the flavor of various foods. When cockroach populations are high, these secretions may result in a characteristic odor in the general region of the infestation. Disease-producing organisms such as bacteria, protozoans, and viruses have been found on cockroach bodies.

Different forms of gastroenteritis (food poisoning, dysentery, diarrhea, and other illnesses) appear to be the principal diseases transmitted by German cockroaches. The organisms causing these diseases are carried on the legs and bodies of cockroaches and are deposited on food and utensils as the cockroaches forage. Cockroach excrement and cast skins also contain a number of allergens to which many people exhibit allergic responses, such as skin rashes, watery eyes and sneezing, congestion of nasal passages, and asthma.

Sanitation, Structural Modification, and Repairs – It is difficult to keep cockroaches from entering homes via boxes, grocery bags, suitcases, and the like, but you can take steps to prevent a serious problem. A key factor in prevention is sanitation. Clean up all spilled foods, including crumbs on the floor. Do not leave dirty dishes overnight. Store items such as cereal, crackers, cookies, flour, sugar, and bread in airtight sealed containers. Empty garbage each evening into a sturdy container with a tightly fitted lid. Structural modifications such as caulking holes in walls where pipes pass through are necessary in the kitchen, bathroom, and other areas of the house in order to control German cockroaches.

While sanitation and exclusion are important factors in gaining control of German cockroaches, infestations will generally require the use of some pest control products and insecticides to gain control.  Since their introduction, gel baits have been a very successful tool in combating roach infestations.  These gel baits come in a syringe and small amounts of bait at placed in the cracks and crevices of areas where roaches are encountered.  The most effective baits will include both insect growth regulators (IGR) and a pesticide that will kill adult roaches and prevent young roaches from developing further.  Other treatments include spot sprays, sticky traps, insecticidal dust, and boric acid.  As with any pesticide make sure the label is followed for proper use.