A potent disinfection solution for disease control and prevention.

NIPCAM now offers whitewashing application for customers looking to prevent and eliminate disease issues common to agricultural production.  Whitewashing has long been used as an effective disinfectant for contaminated surfaces and waste treatment.  We have used this proven method of treatment to combat serious disease issues and pathogen risk that plague the animal production industry.  Many of the primary poultry breeders have come to rely on this method to prevent disease outbreaks our treat infected areas.  These challenges often include bacterial and viral diseases such as Salmonella spp., Campylobacter spp., Laryngotracheitis (LT), Newcastle disease, infectious bronchitis (IB), mycoplasmas, fowl cholera, and other infectious pathogens.  Below is some information on how whitewashing works to destroy and prevent these pathogens from transferring to subsequent and adjacent flocks. 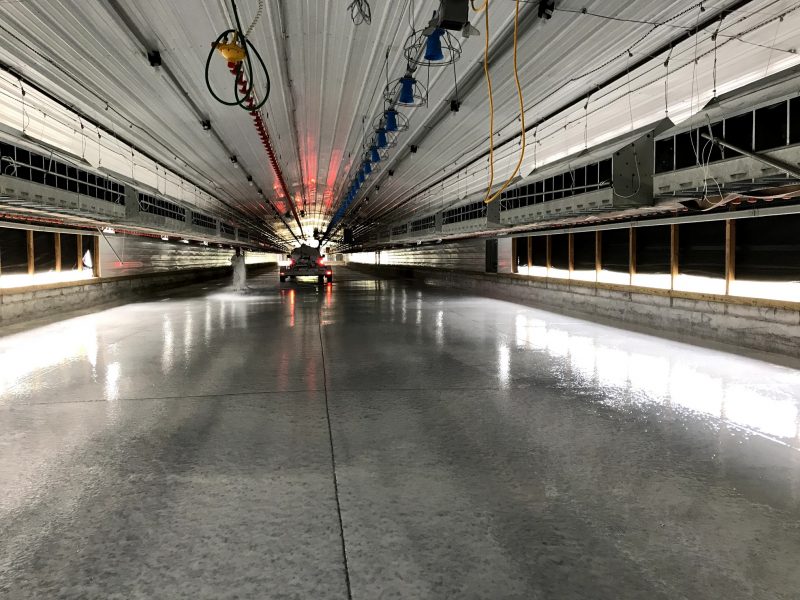 Overview:  Whitewash is a term used to describe the product and process of suspending hydrated lime in water, along with salt and sometimes other compounds (such as an insecticidal dust), to create a slurry that is applied to a surface.  This slurry undergoes a chemical reaction that raises the PH to >12 forming a highly alkaline suspension.  When applied to a surface, this slurry introduces a uniform highly alkaline coating that has been scientifically proven to effectively disinfect by destroying the cell wall of contacted pathogens.  As the whitewash dries, is forms a uniform coating on the treated substrate that provides both a physical and chemical barrier between the substrate and overlaying environment preventing further pathogen transfer.  This barrier also creates an environment that is detrimental to many insect pest, such as the darkling beetle (Alphitobius diaperinus), and can be an effective treatment to insect pest if certain insecticides are added to the slurry.

Supporting Data:  Pilotto et al.1 evaluated the effectiveness of hydrated lime, caustic soda, 2 phenols, iodine, glutaraldehyde, and quaternary ammonium on disinfecting the dirt floor of breeder houses by reduction in total and fecal coliforms using the MPN method.  Hydrated lime was proven to be the most effective method of disinfection reducing the initial contamination by 2.9 log a 99.87% reduction.  In the same study, In vitro test also confirmed the effectiveness of hydrated lime as an antimicrobial on Escherichia coli (E. coli) isolates from the poultry house environment.

Bennett et al.2 evaluated the effect of hydrated lime on the survival of Salmonella enterica Serovar Enteritidis (SE) in used poultry litter.  The study found that hydrated lime significantly reduced the recovery of SE colony forming units at all inclusion levels and the reduction was achieved immediately.