Piperonyl butoxide, commonly referred to as PBO, is a pesticide synergist.  PBO by itself does not contain any pesticidal properties.  However, when mixed with certain pesticides such as natural pyrethrin, synthetic pyrethroids such as permethrin, and carbamate insecticides they become much more potent.  This is why PBO is called a pesticide synergist because it makes certain pesticides work much better.  Without getting into to much technical detail, piperonyl butoxide works by inhibiting certain enzymes that help insects remove toxic substances such as pesticides thus making them more effective and kill longer.  PBO is a great tool to use when the target insects start to become resistant to the standalone insecticide.  However, PBO should be used sparingly because it can select for greater resistance to the active ingredient.

Piperonly butoxide is low to very low in toxicity.  Skin exposure and inhalation should be kept to a minimum.  More info on toxicity

Piperonyl butoxide is sold under many different product names.  Exponent Insecticide Synergist is a product that contains 73.04% PBO. 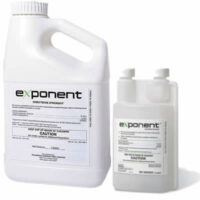