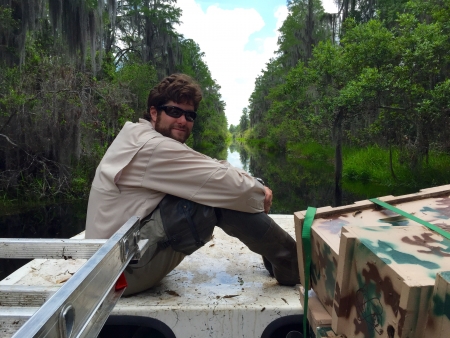 Born and raised in Seneca, South Carolina. Brett earned his first two degrees from Clemson University: Bachelors in Wildlife Biology and a Master’s in Entomology. While working at the Clemson bee lab during his undergraduate studies, he became interested in bees and served as an undergraduate research assistant in 2003 under Dr. Mike Hood, where he studied improved trapping methods for the Small Hive Beetle (Aethina tumida) control.

While working on a joint UGA-Clemson research project Brett was introduced to the UGA Honey Bee Program, and upon finishing his master’s degree, moved the 60 short miles to Athens and continued his education at UGA. At UGA his research focus was on the host-parasite relationship between honey bees and varroa mites (Varroa destructor). More specifically, he examined the transmission and virulence of Varroa between honey bee colonies as related to colony distance and apiary density, the effects of increases in polyandry on drifting rates, and the effect of mite age on host choice.  While earning his degree he gave many talks at honey bee clubs and local schools.  During his time at UGA he also served as an annual instructor at the Young Harris- UGA Beekeeping Institute. He completed is degree in May of 2016.

Currently he is working for the family business NIPCAM, which offers professional integrated pest management (IPM) solutions, especially within the poultry and livestock farming community. In addition, he continues to be active in the honey bee community, speaking at local bee clubs and offering a course on varroa mite management. This course offers hands on instruction encompassing all legal forms of varroa mite control emphasizing the implementation of monitoring techniques and best IPM practices.

Brett is married to Emily Nolan and they have three daughters. His hobbies and interests involve being outdoors: hiking, camping, fishing, and hunting. He also enjoys watching college sports and grilling/barbequing.